Phew, I’m knackered. Just been on my bike round the block.

All in the name of PMB, the things I do. It’s all about the newest low-cost hand sets. Powered by bike!

‘The charger can be fitted into any phone with a 2 mm charger jack, uses a dynamo to generate electricity from the movement of the wheels, bicycles are the most widespread means of transport in many markets around the world, so this is just one more benefit to be gained from an activity people are already doing, to begin charging, a cyclist needs to travel around six kilometres per hour (four miles per hour), and while charging times will vary depending on battery model, a 10 minute journey at 10 kmh produces around 28 minutes of talk time or 37 hours of standby time.

The faster you ride, the more battery life you generate.’

It was interesting whilst I was in Jakarta to note the lack of Apple gadgetry at all the meetings I attended. The dish of the day was most certainly the Blackberry. Which is great, because we have the most amazing range of qwerty keyboard handsets , which are flying out at the moment. (website has more details http://www.pmbgroupltd.com/pmbproductshands.html)

Ten reasons not to buy an iPhone – as seen in The Telegraph yesterday:

1) It’s expensive: Buy the top-of-the-range Blackberry or Android handset and you will still pay a lot less than the extortionate prices Apple charge. If the iPhone weren’t made by Apple, networks would have had to start giving it away on £30 a month tariffs years ago.

2) It’s anti-technology: When the iPhone launched it was cutting edge – now as other manufacturers announce, for instance, that you can use their phones as shareable wifi hot spots, Apple says no. Not because of some spurious “user experience” argument, but because of economics. When will they learn that it’s customers – supply and demand – that should dictate feature availability?

3) No Flash: The iPhone, the phone that promised to put the web into everybody’s pockets, can’t even show you most of it, because it can’t handle Flash graphics. Google Android can, in the latest version (OS 2.2), and it’s going to be available free on a lot of budget tariffs.

4) No multitasking: Tried instant messaging on an iPhone? Oh yes, you have to open the app to see if you’ve got a message. Genius. If Apple announces multitasking next it will be an improvement – but there’ll be no apology for the way it’s treated customers in the past, and no guarantee it won’t behave similarly shoddily in the future.

5) Its battery life is terrible: This isn’t a problem unique to Apple, but look at phones by companies such as HTC – multitasking, better cameras, better screens, all draining their batteries far more – and yet the iPhone, with its undemanding technology, still only offers equal performance.

6) Developing apps for it is costing you money: The special version of the BBC iPlayer, of Natwest Phone Banking, of Eon’s meter reader – developing all of these came out of money that could have been channelled away from a self-important minority and towards more generally useful ideas.

7) It comes with offensively bad headphones: Sit next to somebody using the original iPhone or iPod headphones and you can hear everything they can. It’s another example of Apple charging premium prices, but delivering a dressed up, budget product.

8) It’s not very well designed: Use the iPhone as a phone and it’s not got great reception, nor is it particularly comfortable to use for long periods. It’s a computer that happens to have a phone bolted on – jack of two trades, but master of neither.

9) It charges for satnav: In an age when Nokia and Google Android provide completely free mapping and satnav facilities, the cheapest way you can turn your overpriced iPhone into a satnav is with a £19.99 app. Bargain.

10) Those iPod docks are holding back better technologies: As every hotel increasingly thinks it should provide iPod docks, the momentum behind this technology is only growing. But if it wasn’t for the iPod and iPhone’s ubiquity, there’d be more wifi radios, more new technologies and a range of different options, competing and driving innovation.

Back to a wet and windy Britain.

Africa Com was a huge success, a big hello to everyone I met there. There may be a recession on but you’d never have guessed it – BUY BUY SELL SELL! 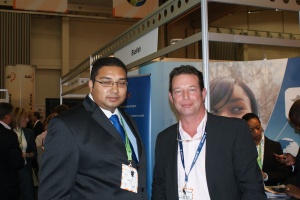 Orders were flying: modems and lo-cost handsets were on the top of most people’s lists.

The atmosphere was positive and we brought home lots of enquiries. 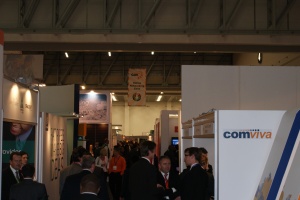 With 4,000 attendees from 120+ countries attending over the 2 days, the AfricaCom congress held in Cape Town provided a great showcase of the continent’s dynamic telecommunications market.

The 200-stand exhibition provided opportunities for participants to learn about the latest technologies and new products, while the high-level conference brought together CEOs and senior executive of the leading companies to share their expertise and strategies for their markets: operators such MTN, Zain Africa, Orange, Vodacom, Etisalat, and Safaricom, were there, not to mention PMB GROUP.

“The high attendance and the level of the debates held this week at AfricaCom is testimony to the continent’s great opportunities, said Julie Rey of organisers Informa Telecoms & Media; while most of the world is facing challenging economic conditions, African companies are leading the way with innovative models and services which enable continued growth”.